The Consumer Affairs Agency appointed actress Kumiko Akiyoshi "Tohoku Future ‘Gambappe’ Ambassador," on September 12, 2013. Her mission is to prevent negative impacts of groundless rumors on food arising from the accident at Tokyo Electric Power Company’s Fukushima Daiichi Nuclear Power Station by disseminating to consumers information on producers’ efforts to ensure food safety and to revive their businesses. Growing up in Iwaki City, Fukushima Prefecture, Ms. Akiyoshi is Japan’s leading actress and has been supporting reconstruction activities in disaster-hit areas after the Great East Japan Earthquake through frequent visits to these places.

After appointment as the Ambassador, Ms. Akiyoshi attended the "Fukushima Organic Festa 2013 in Koriyama" held in November 2013 as a special guest and exchanged opinions with organic farmers and restaurant operators there. In December in the same year, she visited strawberry farms in Watari Town, Miyagi Prefecture, an area hit by the great tsunami, to see how strawberries are grown in farms rebuilt after two years of efforts and spoke with farmers. In January this year, she participated in a women’s networking event organized to foster recovery of confidence in organic agricultural products grown in Miyagi Prefecture, and communicated with both farmers and consumers.

Here is a message from Ms. Akiyoshi, who plans to continue her earnest activities throughout the Tohoku region in FY 2014. 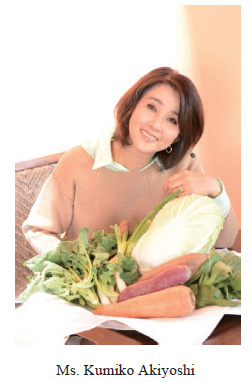 Producers are making great efforts to restore consumer confidence they lost after the nuclear accident. I accepted the role of the Ambassador not because I am from Fukushima but because I wanted to communicate what is going on in the disaster-stricken area to people all across Japan to support them. As I have met and spoke face-to-face with local people through my activities to date, I have realized anew that producers are still struggling. I want to properly understand what is in the minds of these forward-looking and committed producers and hope to get their messages across to many people at every possible opportunity.

The agricultural, forestry and fishery products from the disaster-hit areas are subject to radiation inspection so that only those below the limits are shipped. Although I know consumers have the right to choose what they buy, I would really like them to be aware of producers’ efforts and choose products based not only on the place of production but also on the figures (inspection results). Toward this goal, every consumer, including myself, should gather information and learn things every day to stay abreast of these products.

Wherever you live in Japan, let us together support farmers in Tohoku.