The aim of consumer education is to guide consumers to acquire knowledge and skills, link them to appropriate behavior for safe consumer life. Consumer education also has an aspect as an activity of fostering people capable of coming forward to play a key role in society and contribute to its growth.
In December 2012, the Act on Promotion of Consumer Education came into force for the purpose of promoting consumer education in a comprehensive and integrated fashion.
The "Basic Policy on the Promotion of Consumer Education"(decided by the Cabinet, June 2013), which was developed pursuant to this Act, states that the national government and local governments should provide opportunities so that anyone, regardless of where he or she lives, can access consumer education in various settings, including school, home, community and workplace, throughout a lifetime from young age to elderly. 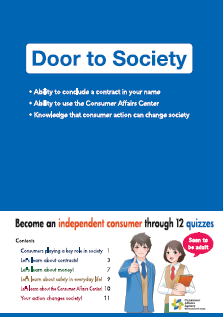 "Direct disposal" means the discarded food as it is, without being used or provided as an ingredient for cooking or food products, for example being past the freshness date.
"Leftovers" means the discarded food without being eaten while being used or provided as a meal.
"Excess removal" means discarding eatable parts of food exceedingly at the time of removal for uneatable parts, such as when peeling the skin from a potato.